Cat Force – Warrior catsThe title is a game in the puzzle and intellectual genre that has been released by Playtika game development studio as a free game for Android devices. Playtika game development studio has published other good works in the Android market and has a successful game development record with millions of downloads. Cat Force is another good game of this game studio that has been able to bring a unique experience to gamers by providing an attractive and fun gameplay. The gameplay of this game uses the usual elements of the jigsaw puzzle, exactly something like Candy Crush or Jewel Quest. But what is different about Cat Force is that in this game you have to swap warrior cats instead of swiping jewelry or candy. Each cat has its own unique abilities and helps to avoid dangers. The object of the game is to remove the obstacles in front of you and fight the enemies that are trying to encroach on your territory. The structure of the game is in stages and these stages are divided into different villages. In terms of content, the number of stages is relatively large and the stages become more difficult as the game progresses. Upgrade system and game reward system are very advanced. There are three types of money or tokens in the game: Coin, Energy, and Cat Jam.

You can earn coins and energy by entering and leaving the game and playing as well as collecting prizes in the game. But you can only get a cat jam if you can complete one step. You need coins and cat jam to upgrade your warrior cats, and you need energy to start a new phase. You can also use coins to buy power-ups. In total, warrior cats are divided into 6 colors and their abilities are divided into 2 general categories. Red, blue, and pink warrior cats are swordsman cats and are suitable for close combat. They first attack the obstacles in front of them and then attack the enemies. Green, yellow, ‌ and purple warrior cats are archers and are suitable for long-distance combat. They attack the enemies first.

We’re always perfecting our game! Download the new and improved version.
With various improvements in the game, your favorite cat game is even more fun to play now! 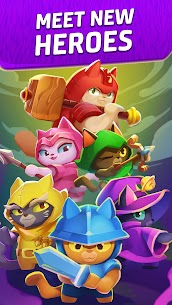 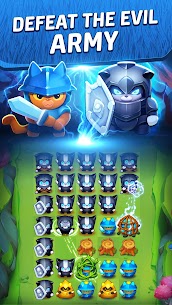 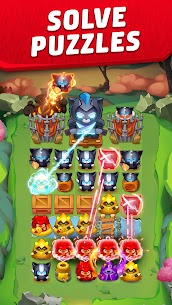 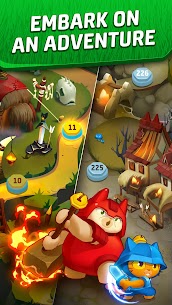 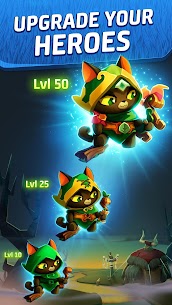